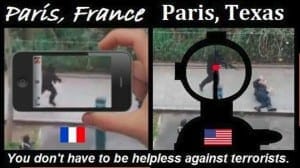 Another video of the Paris attack. Imagine if the videographer had a deer rifle instead of a camera.

Nick Leghorn of thetruthaboutguns.com arranged a simulation of the Paris massacre, but with one victim armed. Of a dozen runs, only one armed victim “survived” (by running away) and none got both shooters. Two got one shooter. This apparently indicates that you need more than one armed defender. But it’s my understanding that the simulated attackers were trained to a level similar to the real attackers, while the victims not so much. That’s pretty accurate. But if the armed victim(s) were fairly well trained, the outcome may have been different yet.

We’ve heard of no new calls from France for more gun laws to further disarm the already disarmed there since the massacre. But we have already heard those calls from the UK and the US.

And regarding all those brain-dead liberal “journalists” who don’t want you to have guns, I wonder if they even noticed the massacre. They can go right on and put up their “no guns” signs and suffer the consequences. Me, I’ll take my own precautions.

“None of the 62 mass shootings between 1982 and 2012 was stopped by an armed civilian. Gun rights activists regularly state that a 2002 mass shooting at the Appalachian School of Law in Virginia was stopped by armed students, but those students were current and former law enforcement officers and the killer was out of bullets when subdued” (Pro-Con) Please stop being ridiculous.

First, we know that Mother Jones and its “data” are unreliable, to put it kindly.

Second, police officers other than Military Police, are by definition, civilians. The Law School armed defenders were both out of their police jurisdictions. Besides, the next victim-to-be really doesn’t care whether or not his armed lifesaver is wearing a blue uniform. If you remain defenseless and call the police, you are admitting that you want a good guy with a gun to come help. But if someone is shooting at you NOW, don’t you want him there NOW? Stats indicate the average 911 response time for law enforcement nationwide for the highest priority calls is around 6 minutes. A really good one would be, say, 3 minutes. The average mass shooting incident lasts approximately 12.5 minutes. So in a best case scenario with police response, the killer has around 3 minutes, plus whatever time elapsed between his first threatening act and the 911 call – let’s say 20 more seconds. That’s 200 seconds. So if your killer was firing one round every 4 seconds (which is really slow, but allows time for movement, reloading and hunting), that is 50 shots before police arrive. If there is one death for every, say four shots, that’s 12 dead victims before the cops arrive. Try it – look at your clock ticking and say “bang, bang, bang,” out loud, at whatever cadence you imagine a killer would use. Don’t stop until the 200 seconds are up. Now imagine if that was really happening to you. If, on the other hand, intended victim #2 shot the attacker, that’s 1 dead victim. If victim #6 did it, that’s 5 dead victims. Now let’s assume your baby girl was intended victim #7. Still want to wait for the cops?

Third, the definition of mass shootings that was used to determine the number of 62 during the specified period specifically excluded the killing of fewer than five people, including the killer. That time period was also conveniently selected to exclude data counterproductive to anti-gunners. If a defender stopped the massacre before the body count reached five, or if there were dozens wounded but not so many dead, or if the massacre occurred after 2012, that event was not counted, though it should have been, for the purpose of counting defending against such attacks (Pearl HS and Colorado Springs’ NL church, for instance). The data also excludes other such events, such as those with multiple killers, involving family members, and events that occurred in “non-public” places. But those victims are just as dead.

You may also want to cross-reference the list of “successful” mass shootings with the data on gun-free zones. The REASON some of those massacres happened without being stopped earlier is BECAUSE a law or policy/rule disarmed the victims (Luby’s and Lockheed, for instance). In many cases the killers knew that and planned accordingly. In fact, Eric Dietz, Ph.D., former director of Homeland Security for the state of Indiana and a 22-year Army veteran, now a professor at Purdue University, researched mass shootings from the 1950s on. He discovered that only two (2) of them occurred where guns may be legally carried.

When you prohibit victims from being armed and then they are killed, you can’t claim it’s a failure of the armed citizen concept. It is instead a willful complicity of the authorities with the massacrists. To put in bluntly, anyone who passes a no-guns law, rule, or policy, or posts a sign to that effect, etc. is literally saying, “If you come here I want you dead, and I am willing to do this thing to help accomplish that.”
https://www.thedailybeast.com/department-of-awful-statistics-are-mass-shootings-really-on-the-rise?ref=scroll

“Only half of Rapid Mass Murder incidents are ever stopped by anyone, meaning in that half, the murdering stops only when the murderer says it stops, as in this Florida example. In the half that is stopped by someone, it is on-site citizens that are the majority factor by a two-thirds majority. The remaining minority third is stopped by OFF-SITE police.”

“In all but maybe one of the active shooter attacks in this country, when there has been an armed person present who acted aggressively, we have had zero to nine victims–single digits.”